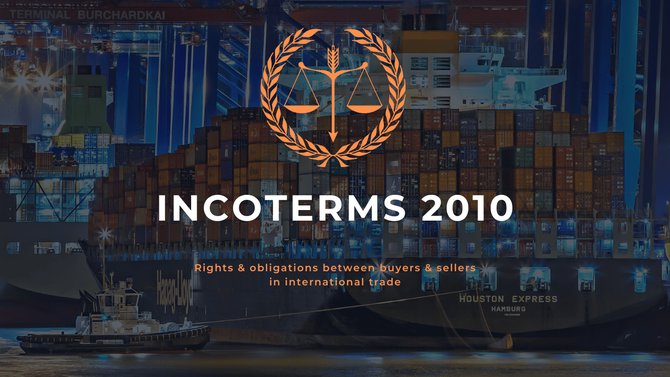 With Freightfinders, you get a fast and easy to understand overview of the Incoterms 2010 by the ICC (International Chamber of Commerce). These international rules of commerce harmonise and simplify contractual provisions between the byer and seller .

During import and export, you frequently stumble over abbreviations like FCA, EXW or DAP. These represent the different clauses of Incoterms 2010, which are indispensable in international trade. These are rules that define the obligations of sellers and buyers for the transport of the goods and thus unify them. That is why Incoterms, which are issued by the International Chamber of Commerce (ICC), have a very high priority in foreign trade.

Are you looking for transports, you can filter by Incoterms? Then use our free freight search engine:

Classification of the Incoterms 2010

In addition, the Incoterms 2010 are divided into four groups:

Here, you will find the individual Incoterms 2010 shortly explained. However, before applying them in a contract, the original text of the perspective Incoterms clause should be considered, since these are only summaries which are intended to facilitate the understanding.

In the Incoterm 2010 EXW ("Ex Works"), most of the responsibility lies with the buyer. They must take care of the transport, the costs, and the insurance. The seller, on the other hand, must provide the buyer with the goods, which can be picked up at the place of departure. The departure location is usually the plant itself, the factory or a warehouse.

The Incoterm FCA ("Free Carrier ") states that the goods are delivered by the seller to the carrier or another person designated by the buyer. This is done either at the seller's place or at a place named in the contract. The 2010 Incoterm FCA stipulated that up to this designated place, the costs and risks lie at the seller.

Incoterm 2010 CIP ("Carriage and Insurance Paid") says that the seller must supply the goods at a previously agreed place (if a place has been determined) to the carrier or to a person named by the seller. The CIP Incoterm of 2010 also states that the transport to this place must be financially covered by the seller. In addition, the seller must cover insurance against the buyer’s risk of loss or damage. If the buyer wishes a larger coverage than agreed in the Incoterm CIP, they can make an agreement with the seller or cover an additional insurance at their own expense.

The Incoterm 2010 DDP ("Delivered Duty Paid") determines that the goods’ customs clearance for import and export has been paid for by the seller. This means that all required customs formalities have been fulfilled and all customs duties and associated costs during import and export have been covered by the seller. In addition, the 2010 Incoterm DDP says that the seller bears all costs and risks associated with the transport to the destination.

The Incoterm 2010 DAP ("Delivered at Place") stipulates that the goods are then delivered, if they have been provided ready for unloading to the buyer on the designated means of transport in the previously named terminal and port or another determined place. The seller bears all risks and costs during the transport of the goods up to the date of arrival at the place of destination.

The 2010 Incoterm DAT ("Delivered at Terminal") states that the seller delivers as soon as the discharge has taken place from the means of transport and the goods are made available to the customer. This can be at an agreed terminal in a port or a place, for example, a quay, container depot, a warehouse or an air freight, rail or road terminal. DAT also determines that the seller bears all risks and costs up to this point. However, the customs duties for importation are excluded from these costs.

In the Incoterm 2010 clause FAS ("Free Alongside Ship”), the seller delivers as soon as the goods are placed in the designated port of shipment alongside the ship determined by the seller. At this exact moment, the risk is also transferred from the seller, as the buyer is now responsible for the loss and damage of the goods. Moreover, the Incoterm 2010 FAS determines that the buyer will bear all costs from this point on.

The 2010 Incoterm FOB ("Free on Board") states that the seller delivers the goods on board the ship designated by the buyer in the agreed port. The seller must clear the goods for export. As soon as the goods have arrived aboard the ship, the responsibility for the risks and all costs is transferred from the seller to the buyer.

With the 2010 Incoterm CFR ("Cost and Freight"), the seller supplies the goods to the named ship. From this point on, the risk of loss and damage is transferred from the seller to the buyer. However, the costs for the transport to the port of destination are still covered by the seller.

The 2010 Incoterm CIF ("Cost, Insurance and Freight") is similar to the Incoterm CFR. Here, too, the seller delivers the goods onto the ship or procures the goods already so delivered. The risk of loss and damage is transferred to the buyer as soon as the goods are on board the vessel. According to Incoterm 2010 CIF, the seller bears the necessary costs until arrival at the port of destination. Furthermore, the latter must cover a transport insurance with a minimum coverage. If the buyer wishes to have a higher insurance coverage, this must be agreed upon with the seller or an additional insurance can be covered at their own expense.

Sign up at our Major Customer Portal to benefit from cheap recurring transports, filtered by Incoterms!

We use cookies to improve user experience, and analyze website traffic. For these reasons, we may share your site usage data with our analytics partners. By clicking “Accept” you consent to store on your device all the technologies described in our Cookie Policy